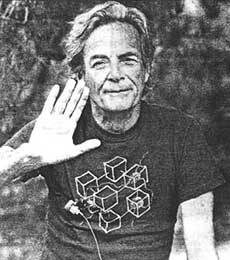 The Long Now essay by Daniel Hillis on “Richard Feynman and The Connection Machine” contains some fantastic, inspiring nuggets, which I couldn’t resist quoting from … they really remind me of conversations at Jodrell Bank.

“… we planned to connect the processors in a 20-dimensional hypercube …”

“In retrospect, if we had had any understanding of how complicated the project was going to be, we never would have started.”

“… he distrusted abstractions that could not be directly related to the facts.”

“Since the only computer language Richard was really familiar with was Basic, he made up a parallel version of Basic… “

“Like many physicists who had spent their lives going to successively lower and lower levels of atomic detail, Feynman often wondered what was at the bottom. One possible answer was a cellular automaton. The notion is that the “continuum” might, at its lowest levels, be discrete in both space and time, and that the laws of physics might simply be a macro-consequence of the average behavior of tiny cells. … If the universe in fact worked this way, then it presumably would have testable consequences, such as an upper limit on the density of information per cubic meter of space.”

“… a typical Richard Feynman explanation … on the one hand, it infuriated the experts who had worked on the problem because it neglected to even mention all of the clever problems that they had solved. On the other hand, it delighted the listeners since they could walk away from it with a real understanding of the phenomenon and how it was connected to physical reality. “

Balancing vast complexity with the ability to genuinely communicate ideas is a remarkable skill, and very hard to find. As someone who takes quite a long time to understand that complexity, I’m eternally grateful to the handful of people I’ve met who can do this. The chasms between science and its representations in business, politics and the media are intensely frustrating, and very hard to navigate.

Has anyone documented best-of-breed examples (like Feynman) to try any cement those bridges? Why don’t we have better communication? We have great examples of interconnected silos, but no real cohesion…