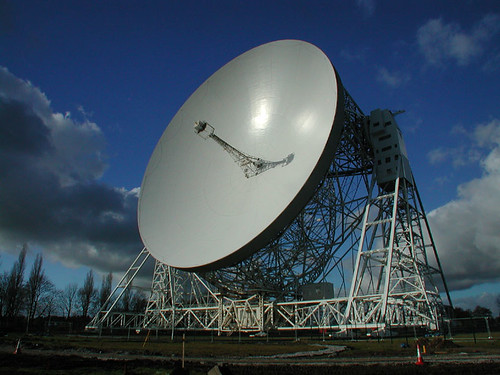 This year is the 50th anniversary of Jodrell Bank.

Today is also a landmark day for Jodrell Bank – the whole science team are moving from on-site, to Manchester University. While this is probably very practical, I can’t help feeling sad that this unique and historic research establishment is dramatically shifting its identity.

I worked at Jodrell from 1994-1995 and thoroughly enjoyed it: 120 scientists in the middle of a field in deepest Cheshire. Remarkably “British” Science – on my first day I was shown around to one of the “workshops” (very slightly more advanced than a garden shed) where someone was building an amplifier for the main dish, and cooling it to under 20 degrees Kelvin, making it one of the quietest amplifiers on Earth.

In another room, years later, someone was building their own data router, to carry data at 30 Gigabits per second, since the best commercial ones couldn’t come anywhere close …today MERLIN‘s seven telescopes ship 30Gbps, each, to a huge computer cluster at the main facility that processes 150-200Gbps of data in real-time – making it one of the most powerful computers on Earth. The history of Jodrell Bank and the Lovell Telescope is vast: it’s first official task was to identify and track Sputnik – it was the only instrument the West had (at the time) that could do so. Pulsars and Quasars are amongst the discoveries in which Jodrell was the catalyst. The Cosmic Microwave Background, Masers, Gravitational Lenses, and myriad others are part of the rich mixture of Radio Astronomy research.

Jodrell gets very little mention compared to other facilities, unlike its US counterpart the VLA, or the Hubble Space Telescope. The latter is particularly relevant – Jodrell has had equal or better resolution than the HST since before HST launched – and the only reason you don’t know that is because NASA have a $20m “marketing budget” to tell the world. That’s about the same as Jodrell had to upgrade the entire facility.

Jodrell was mentioned a couple of times in The Hitchhiker’s Guide to the Galaxy “… Jodrell Bank looked straight through them [Vogon spacecraft]— which was a pity because it was exactly the sort of thing they’d been looking for all these years … someone decided it was time for a nice relaxing cup of tea” – and happens to be very true: tea at 11am and 3pm was an unmissable part of the day. Everything stopped.

It was at tea that one of the longest serving members of staff was trying to recall how they’d built some of the 6-bit computers I was trying to re-interpret the data from (“now was bit 3 the weather or the telescope ID?”). I should have kept that envelope…

Last year the Lovell Telescope was nominated the UK’s greatest ‘Unsung Landmark’ in a BBC competition. This only scratches the surface. To me, Jodrell Bank is iconic of an entire country of passionate, brilliant scientists, who get little of no recognition for the spectacular work that they do. At various times, Jodrell has had to justify its existence, which is reasonable for any institution to have to do, but I believe that much of its real value is overlooked… 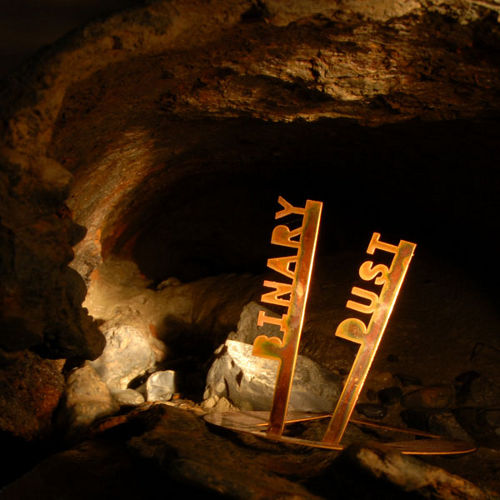 I am delighted that, 13 years after leaving, I will be going back to hear some of my music (“Binary Dust“) played at the 50th Anniversary celebrations, right in front of the Lovell Telescope dish.

They are also projecting onto the 76m Lovell dish, which should be quite spectacular – it’s at least twice the size of the largest IMAX screen (hope the weather’s good!).